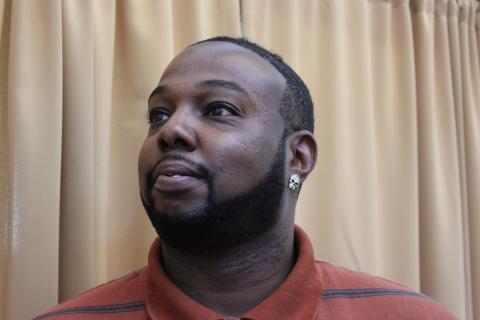 When we met Keith Evans at East Baltimore's Jericho Reentry Program in early May, he often returned to one theme--how different the outside is from the inside, and how hard it can be for an ex-offender, once back home, to turn off the protective, defensive mindset that was necessary to survive in prison.

"On the inside it's more routine," Evans said, "basically more watching your back. You're also trying to stay out of trouble so you can get home faster.

"But out here," he continued, "there's more of a challenge because now you don't have no one taking care of you, you're back in control of yourself again. There's no more of the state telling you when to wake up, go to sleep, and feed you.

"Now," he said, "it's your own responsibility."

Evans has been outside for 60 days and is still looking for work. He had been a forklift driver at Shasta Beverages in Baltimore before his sentence for selling heroin. "I’ve applied for cleaning jobs, warehouse, forklift," he said. "I’m in the process of getting my license back straightened out, and I wanna go back to driving again."

But it's hard for someone with "that tag as an ex-con," as he puts it, to find work--as he discovered recently when he applied for a one-off job downtown.

The gig was just for two days, filming from midnight to 6 a.m.

"I was interviewed," Evans said, "and they gave me the nicest letdown, but I knew it was a letdown. What was heartbreaking was I had to come out and ask, how dangerous can I be in the audience cheering?

"I said I gave you the truth," he continued. "I’ve been more than forward and truthful about where I’m coming from and where I’m going. I just asked, how dangerous, how, what kind of level of ex-con do you have to be, to cheer? You know? I said, I understand to a certain extent but, to wrap that up it’s really heartbreaking and depressing when you can’t even get to cheer."