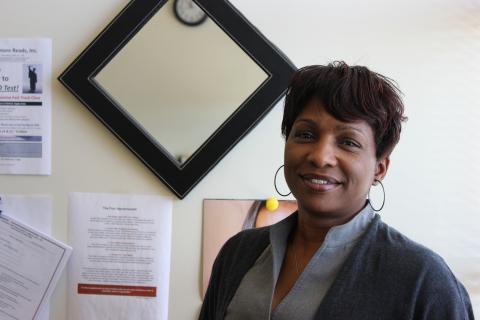 Thanks to a law enacted in 2007 that reenfranchised felons who had completed their sentence, parole, and probation, she voted in the 2012 election.

"When I first came home of course I knew I was still serving my sentence, so I couldn’t vote for the first election, that was a big deal, I missed that," she said. "Then when it came time for President Obama’s second term, I was confused as to whether or not I could vote."

She still owed restitution, but she couldn't find any documentation saying whether or not outstanding restitution kept you from voting.

"At that time I was off of parole, off of probation, I had completed my sentence, and in Maryland you get your right to vote restored," she said. "And so I called, and I spoke with someone at the board of elections and they were like, 'Oh well yeah, you can vote, that was changed.'

"It was great," Harrison said, "but then I was still frustrated because I felt like, if I hadn’t called, how many other people not like me, without the education or the background or just the intuitiveness to call, didn’t call, and didn’t vote this second election? So I made it a point to put up some flyers and post some things in the office, and you know, call and let people know."