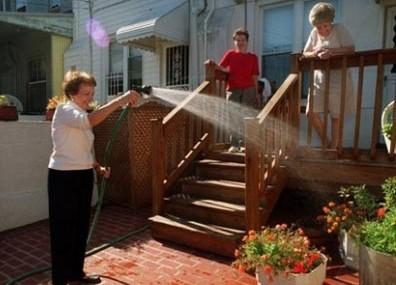 I learned of Virginia “Ginny” Dobry’s death some days after her funeral.

I found out she died as I read through the prayers, events, and remembrances listed on the second page of a St. Vincent de Paul Church bulletin.

Ginny died on Feb. 3, 2013, and her funeral was Feb. 8. I am sure St. Elizabeth’s Church was filled with loved ones and friends, as Ginny was well-known in her neighborhood of Patterson Park.

I met Ginny on Sept. 7, as I was interviewing long-time Baltimore residents in preparation for the premiere of The Lines Between Us. I wanted to speak with people who had lived in their neighborhoods for quite some time as they could share stories of how neighborhoods have changed over their lifetime.

I pulled up to Ginny’s beautiful two-story rowhome on Kenwood Avenue around 10:30 a.m. I knocked on the door, and there was Ginny. She was wearing casual clothes, and her face was free of makeup. She looked as though she was in the middle of doing some home repairs, as paint, or some sort of Spackle dotted her clothes.

I mixed up the times-Ginny was to be my second visit. She pointed me in the direction I should go to get to Ms. Barbara Baynes’ home, which is also on Kenwood.

Realizing my conversation with Barbara might run over into Ginny’s time, I called Ginny to let her know I would be a little late returning to her home. I asked if we could still talk. She said I could be 20 minutes late-but no later-as a friend of hers had died, and she had to go sit Shiva.

When Ginny opened the door to her home again, she was wearing a crisp white blouse, a string of pearls and black dress pants. Her hair was done and she was wearing makeup. There was not an ounce of paint, or Spackle, on her pressed clothes. 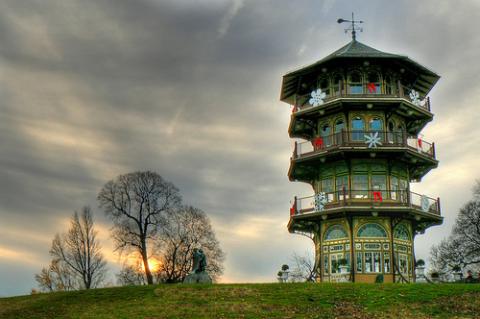 After walking through the front door, she had me turn around and look up. My eyes zeroed in on the stained glass atop the door that was catching the light.  She instructed me to look in the direction of a rendering of the Patterson Park Pagoda.

Ginny beamed. She loved the Pagoda and she loved Patterson Park.

“It’s the best backyard. I love the activities, the concerts, the people walking their dogs, the kids in strollers,” Ginny said. “It’s the young people that have given us life. I just love them all. I love them all.”

Once inside the living room, Ginny showed me over to a large piece of some type of stone that was sitting on an easel. There was a plaque affixed to the stone and I remember Ginny telling me that the stone had some affiliation with Johns Hopkins. It was won at a fundraiser, I believe to benefit the neighborhood.

We had a seat on her sofa, and began talking about Patterson Park and her family. I reached for my audio recorder and moved the microphone close to her chin.

She asked me if we could just talk, and I could write down notes. Although we had previously agreed that I would record her, Ginny said she didn’t feel comfortable with her voice. As much as I tried to convince her that her voice sounded fine, she said she would prefer me just taking notes this time, and I could maybe come back and record another time. I agreed.

Ginny had lived in her home since 1956.  She and her late husband Dan raised six children on Kenwood Avenue. Ginny told me that every Thanksgiving, for more than 30 years, her children and relatives would participate in the “Turkey Bowl,” gathering in Patterson Park to play football.

Ginny’s mother and sisters would later move onto Kenwood.

While Ginny described herself as a stay-at-home mom for a period of time, she was also a licensed practical nurse. She worked at a nursing home for 25 years and went part-time in 1996. She officially retired in the spring of 2011.

But retirement did not mean that Ginny slowed down.

She was in a rosary group, a Bible study group, and frequently attended cultural activities at the Everyman Theatre and the BSO. She was also was quite informed on the news of the day.

“I read the Sun paper every morning,” she said. 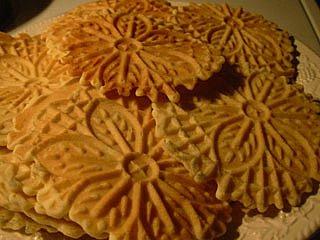 During our conversation, one of her daughters walked in. After there was some discussion of cookies, Ginny instructed her daughter to go in the kitchen and retrieve some cookies for herself, and for me.

“I make pizzelles, have you ever had them?” she asked me.

I know all about pizzelles. My husband's grandmother makes them from scratch. I’m a fan.

“Good, then you have to try mine,” she said.

After the cookies, and continued conversation, Ginny said that she had to head out to be on time to sit Shiva.

She said I could come back another time and record her. I agreed. I asked her if I could take a picture of her for this website, and after fiddling with her hair and taking off her glasses she pointed to a small bandage on her nose and said “Next time, after I get this thing off.”

She was covering up a small blemish. We agreed next time we would set up a picture.

I can’t remember what made her say this as she was showing me to the door, but she said she loved Baltimore City, and especially loved Patterson Park. She said she hated it when people talked bad about the City, because there were so many good things here.

But when people did speak ill of Baltimore, she said “I want to give them a little piece of my mind.” She said this whilst shaking her first.

I never got back to Kenwood Avenue to record Ginny’s conversation. I wish that such a sad occasion was not the reason why I had only my written notes to share.

A Virginia Dobry Community Programs Fund has been set up to honor her commitment and involvement in Patterson Park.  More information can be found here.