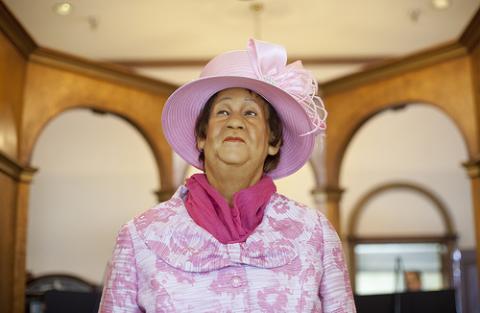 One institution in Baltimore that’s known for crossing lines is the National Great Blacks in Wax Museum, which is located in East Baltimore on North Avenue and Bond Street. It’s a dilapidated neighborhood, which seems to have more homes that are boarded up than are occupied.  It’s an unlikely neighborhood for a museum, but in fact, the Great Blacks in Wax Museum has been part of the community since 1988.

It was the first museum of its kind in the country, and draws visitors from around the region. The exhibits include famous Marylander Harriet Tubman, a wax figure of President Obama, and a life-size model of a slave ship, depicting the quarters enslaved Africans would have had when crossing the Atlantic, along with famous Marylander Harriet Tubman, and a wax figure of President Obama.
The museum was founded by Elmer and Joanne Martin.  Elmer Martin died in 2001, but Dr. Joanne Martin is the museum’s president and CEO.  She plans to expand the museum along the entire 1600 block of East North Avenue.  They also have  plans to unveil new wax figures this coming spring.  Tom talks with her about the decision to keep the museum on North Avenue--and takes a tour of some of the exhibits.

The picture above depicts a wax figure of the late Dorothy Height, former chair and president emerita of the National Council of Negro Women, stands in the lobby of Club Meade for the installation's Black History Month observance on Feb. 23. Height is just one of many wax figures on display at the National Great Blacks In Wax Museum in Baltimore. (Photo by Sarah Pastrana, credit flickr/Fort Meade)