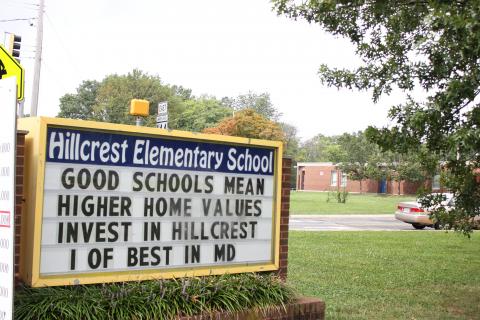 Today on our series "The Lines Between Us," we look at the decision city parents face when it comes time to send their young children off to school for the first time. We'll hear from one parent who decided to send her daughter to parochial school. Then three city parents will tell us what drove their decisions to send their children to city public schools. One started a charter school. One moved to Roland Park for its neighborhood school. Another stayed right where she was.

Sheila Ebelein is president of the Glenham-Belhar Community Association in Northeast Baltimore. In February, we talked to her about what it takes to sustain middle-class neighborhoods in the city.

"What I’ve seen over the past 20 years," she told our senior producer Lawrence Lanahan in February, "is an individual will move in, they’ll invest money in their house, it’ll look fantastic, they’ll be great neighbors, they’ll either get married or enter into a relationship, many times after that they will have a small child, and somewhere between age two and four, the 'For Sale' sign will go up."

Enrollment started ticking up in Baltimore City schools in 2008—the first increase in four decades. There are nearly 3,000 more students enrolled now than there were five years ago.

But not everyone is on board. A 2011 report on the connection between schools and community development, written by the Goldseker Foundation in Baltimore, found that, "Fairly or unfairly, neighborhood schools often were perceived as liabilities; rarely were they among the assets that neighborhoods used to promote themselves."

In today's episode of "The Lines Between Us," Sheilah Ebelein tells us why she stayed in the city when her daughter became school age, but sent her to parochial school.

Then we talk to a several parents about why they did decide to send their children to city public schools. Stephanie Sterling is part of a group called Village Parents that encourages parents in Charles Village to get acquainted with their two neighborhood public schools, Barclay Elementary/Middle and Margaret Brent Elementary/Middle. Stephanie’s children attend Margaret Brent.

Khalilah Harris has children enrolled at Roland Park Elementary/Middle School, and she works at the University of Baltimore helping high school students—including graduates of city schools—get ready for college.

On Thursday, Margaret Brent Elementary/Middle will have a summer social for pre-school aged children to hang out and have a snack; it starts at 6:30.

Please consider sharing your story with us. In particular, we’d like to hear from parents who feel their neighborhood school is underserving their children, but don’t feel they have any options besides that school. What are you doing to get your child a better education? Go to our "Your Stories" page.