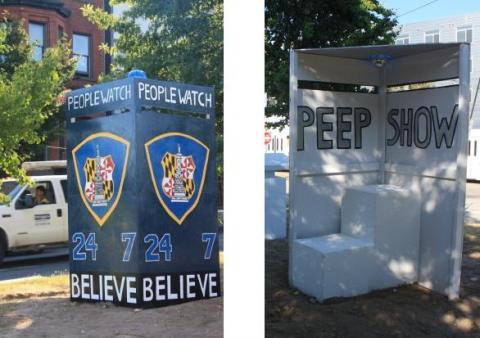 Our series "The Lines Between Us" began by looking at how housing policy and lending practices helped create this region’s fractured landscape of race and class. Then we heard about the role of race, class, and gender in employment and other economic opportunities.

Now our series turns to those who find themselves isolated from those opportunities. We’ll spend the next few weeks examining the lines between us that are affected by the state of law enforcement and criminal justice in our region.

We’ll start with surveillance. Some see Baltimore’s iconic blue light police cameras as a marker, lighting up the lines around the city’s high-crime neighborhoods. For residents living among the blue lights, the cameras can be seen either as a welcome crime deterrent, or an affront to their privacy.

You can see the city's map of cameras here. You can read an Urban Institute evaluation of their effectiveness here.

First up in this segment, we'll hear the story behind "Blue Lights," a song by Manta Ray Records hip-hop producer Auddio Viddeo about the effect of living under the cameras. Then David Rocah, an attorney for the Maryland chapter of the American Civil Liberties Union, talks about how surveillance relates to inequality.

Then, Sheilah Kast talks to Lt. Sam Hood, the director of the Baltimore Police CITIWATCH program, and to Brandon Scott, a City Councilman who wants to bring more cameras to his district in Northeast Baltimore.

After that, Tom Hall talks to two artists who have created works commenting on the pervasive symbols of Baltimore's crime rate: Auddio Viddeo, producer of the song "Blue Lights," and Michael Farley, whose sculpture at Artscape 2010 allowed people to look out from the inside of a giant CITIWATCH camera.