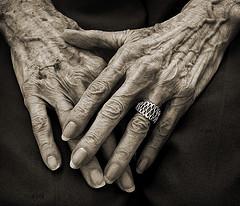 Among poor seniors, those over age 60, only seven states have a higher proportion who are “food insecure. Maryland ranks number eight.

We wanted to hear from some seniors in the Baltimore area who may have experienced food insecurity. So yesterday Producer Matt Purdy rode along with Meals On Wheels of Central Maryland, which delivers two meals a day to immobile, mostly low-income seniors.

Since December, Henrietta and Frank Smith have volunteered their Thursday mornings delivering food to a dozen seniors for Meals On Wheels of Central Maryland. Their route zigs and zags through Northeast Baltimore. Their first stop is with 63-year-old Daniel Watterson.

"I know that Mr. Watterson, he’s… he can’t get around very well", Henrietta Smith says.

"He uses a wheel chair and a walker… so, sometimes when we knock on the door, if he’s upstairs it’ll take some time for him to get downstairs to us."

Mr. Watterson lives with his niece, and he would travel to a center in East Baltimore where he’d get his meals. But, he began having trouble getting there.

"Because I used to have to travel so far where I was living at to the place just to eat," Watterson says.

"And, I can’t get around like I used to, so when they told me that, that’s when I had Meals On Wheels start bringing me the food."

But, Mr. Watterson has a niece who is able to help him as well. Not everyone does. Many seniors live by themselves, including 71- year-old Evelyn Samuel, who is disabled and lives in public housing in the Pen-Lucy neighborhood.

She told producer Matt Purdy, "I have been hungry and I have done without if I didn’t have anybody to go out into the store. Or, I looked back into my cabinet and tried to substitute, or just plain did without. And that’s not good."

Today, on “The Lines Between Us” on WYPR, we’re talking about the lines between hunger and health among seniors.

And, on the line from Lexington, Kentucky, is Professor James Ziliak. He teaches microeconomics and is director of the Center for Poverty Research at the University of Kentucky. He has co-written several reports on senior food insecurity.

And, here's a chart of the shift in food stamp participation rates in Maryland between 2007 and 2012, courtesy of Maryland Hunger Solutions.