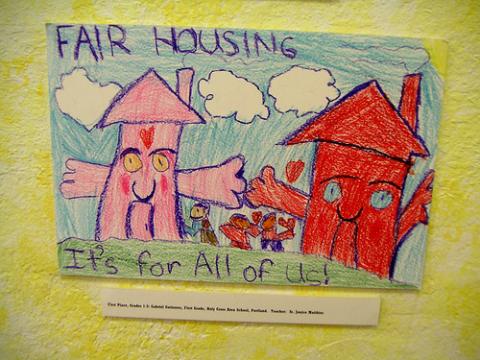 Earlier in our series "The Lines Between Us," we examined how housing policies throughout the 20th century contributed to the lines of race and class that still cut through our region today. The Fair Housing Act of 1968 had a mandate for the federal government to “affirmatively further” fair housing—to help erase the lines between us, as it were. The U.S. Department of Housing and Urban Development has been criticized, however, for not using all of its power to compel communities to promote integrated housing in the four decades since the act was signed.

A recent review of HUD, however, claims that it had become “re-energized” during President Obama’s first term, although the review said “much work remains to be done” in enforcing the affirmative furthering of fair housing.

Today, the University of Maryland Carey School of Law hosts a conference in Baltimore called “The Fair Housing Act at 45: Actualizing the Duty to Affirmatively Further Fair Housing.” Sheilah Kast will be moderating a panel, and many important fair housing issues will be covered throughout the day.

This morning on "The Lines Between Us," Sheilah talks to two panelists from the conference. Melody Taylor-Brancher is the U.S. Department of Housing and Urban Development’s Mid-Atlantic regional director for fair housing and equal opportunity. Dan Pontius of the Baltimore Metropolitan Council, who helps coordinate the region’s approach to fair housing.

The conference at University of Maryland Carey School of Law is sold out, but you can find more information here.

The state of Maryland is in the midst of revising its Qualified Allocation Plan—that’s the program that uses tax credits to encourage developers to create low- and middle-income housing. The state has already gotten public comment on the first draft. Another draft is scheduled to be released next week, and the deadline for public comment on that draft is April 29.

Also part of this episode is Tom Hall's interview the filmmakers behind the documentary The Central Park Five, about the wrongful conviction of 5 black and Latino youths in a high-profile case. Tom also talks with one of the Central Park Five.

Listener Lauren Siegel sent us this letter in response to the episode:

I enjoy your show, particularly the exploration of class and inequity issues; I am a social worker with 30 years experience working with homeless people and helping them find affordable housing. So I was particularly interested in today's show, with guests Dan Pontius and HUD official Melody Taylor-Blanchard.

Unfortunately, there was a lack of balance; there were no affordable housing advocates or poor people who had to use a section 8 voucher in order to have housing. I do understand that such people may be hard to find.

The truth is that it is extremely difficult to use a section 8 (now ironically called " Housing Choice") vouchers in the Baltimore metropolitan area. In addition to landlord discrimination, there are very real challenges re: transportation, application fees, security deposits, and the lengthy inspection process. These difficulties are reflected by the low rate of "vouchering up", (a family or individual actually moving into a unit using their voucher) estimated at about 50%.
Vouchers are useful to many, but they are not the answer to our huge regional affordable housing crisis, but public housing is.

Sadly, many jurisdictions, such as Baltimore County do not have any public housing and are virulently opposed to creating it. (Baltimore County even deconstructed their two project-based section 8 complexes, Kingsley Park, which was in Essex, and another in Dundalk, over a dozen years ago.) Why? Discrimination against the poor. "Nimby"-ism. A false belief that all public housing families will increase crime. Racial discrimination. And the high cost and desirability of county land.

Yet homelessness has been increasing in Baltimore County for decades, and it is primarily due to the absence of affordable and accessible housing.

In the city of Baltimore, the Housing Authority has reduced its stock of public housing over the past decade from 16,000 units to around 9,000 that they have now.  There is a huge lack of affordable housing; the recent " encampment" issues are one outcome of these policy decisions.

The State's plan--creating affordable housing by offering tax credits to developers to construct it-- is inadequate at best, and downright criminal at worst.  A developer is interested in making a large profit. This is not necessarily conducive to siting housing that takes into consideration the needs of poor families and individuals: housing on major transportation lines, near high-preforming public schools, or close to retail regions where there may be employment.  The State has an obligation to ensure that its poorer residents have fair and appropriate housing; it cannot rely solely on developers to make this happen.

What we need is a regional plan that requires all jurisdictions to create public housing and project-based section 8 complexes that are in ideal locations for transportation, education and retail . This is the only was to ensure fair and affordable housing to all residents.