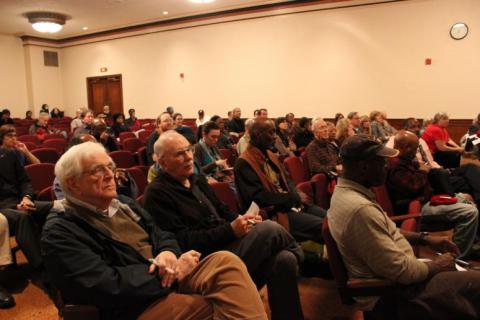 Below are all of the questions and comments submitted at the screening and discussion. All cards were handed in anonymously.

"How can racial equality be reached when minorities-particularly blacks are so isolated from the rest of the country?"

"Is the attendance and being comfortable in an HBCU affect the performance of a black student?"

"Do you see any shining examples of integrated schools or neighborhoods in the region?"

"Has the panel read Antero Pietilia's book "Not In My Neighborhood," your thoughts?"

"The ideal of race as a subject to be figured out is an illusion within itself because there is nothing to figure out. Social systems have created and promoted false concepts regarding human beings and their differences. What were the motives for creating, promoting, and maintaining falsehood for centuries?"

"What does it say about our society that President Obama is considered black rather than white, particularly when he grew up with a white mother and grandparents?"

"What are the steps to establish a national dialogue on racism and race?"

"Beyond the school buildings what is being done to improve the quality of education in Baltimore City?"

"As the housing industry has caused the concentration of low-income minorities in urban centers, how has public policy pertaining to the drug criminalization and rehabilition furthered this discrimination at present day?"

"Do you think that films such as this should be incorporated in the educational system? If so, where would it be placed?"

"It seems race is discussed from the distance. People who are in control of..."

"Extending the inequality is the differential quality in public schools. Also, finance of higher education favors homeowners. This leads to different levels of opportunity."

One audience member quoted Frederic Bastiat (France 1850)- "When plunder becomes a way of life for a group of men living in society, they will, in the course of time, create a legal system to allow it and a moral code to glorify it."